Spending money, but not playing.. 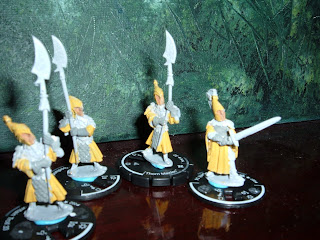 This seems to be a perennial problem. Of course, when switching from my traditional bit of not playing all games to a focus on not playing tekumel, there will obviously be some need for purchases. I have been getting minis that either are, or will serve well, for tekumel. Four units of Tsolyani and three Yan Kor, from Tita's House of Games, when they had a Holiday sale at the end of the year. And some Ghost Miniatures Elves from Old Glory who, so far, are mustering out to be Temple Guards for Karakan and Belkanu (and probably their cohorts). I ha 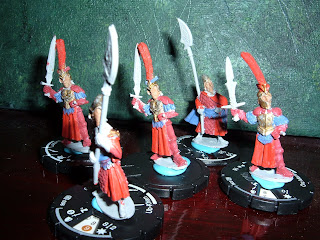 ve even begun painting these. Further down we see some Priestesses of Dlamelish and her Cohort from Bronze Age Miniatures. Paint work is ongoing, but good enough for now.

Several times I have found nice figs on Ebay from a "buffy's mommy" who seems to have no end of old 70's figures. I have purchased a pile of bearers, some Amazons (Aridani), and Numidians, who will function as poorer clans men. I also have some Asar from crocodile games for generic guards. These from the Noble Chirine.

Most recently, on Ebay, I won a set of old PHD figures, non humans. This means I will have some Ahoggya, Shen, S'su, Pygmy Folk, and a host of Tinaliya. The competition was fierce, especially for the Ahoggya, everyones favorite from Tekumel, I suppose. 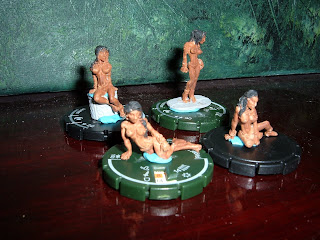 Much Painting ahead, I see.

I also purchased, from Tita's again, the army books for Tsolyanu, Yan Kor and Mu'ugalavya, and the Tsolyani Primer, which, it turns out, is a really sound basic course. Now I need to track down some people who have a pretty firm grasp of Tsolyani, who have time to do some recordings.. I think that training vids based upon this book could be a very good thing..

These purchases have put me over budget on gaming at the moment. And yet, I bought three copies of Junta when it was on Tanga for 9 bucks..

I also realized I only have a few months before my Old Glory Army membership lapses. So, I need to make a list of things to buy from them, and do a bulk purchase. I am also looking at sponsoring a legion via the Tekumel Project. All this, and I haven't gotten a game together yet.

In theory, I am scheduled to run a game this Thursday. I have one player, for sure. One I have invited who has not replied. I have done no advertising. I have an adventure idea, but it isn't for one person, really. What to do, what to do...
Posted by kokigami at 9:52 PM 3 comments: Links to this post

Twenty Ten, the Time of Tekumel

It's all the rage, mentioning that this is a new year. Not one to buck the trend, so, I formally announce my Year of Tekumel. So, what, exactly, does this mean. Well for starters, Tekumel will be my primary focus for gaming. I don't know how this will work, as far as time is concerned. I figure it will be 80% of my new gaming budget*. I resolve to paint a Several Tek related miniatures for each non tek related miniature. And Most of my terrain projects will revolve around Tek usable items. I may even go so far as to create some original (derivative) Tekumel stuff.

This does not mean I will do no non tekumel stuff, of course. I still have projects that need tending to. But, Tekumel wi

Ideas along those lines include a Gazetteer for Penom. It would be modeled on the wonderful Butrus Gazetteer. Penom is oft the oft referenced, but seldom detailed armpit of Tsolyanu. I may also do -for my own benefit, but potentially useful to others - a series of educational powerpoints, or pod casts or something. This is all very ambitious.

I plan to spend some cash on this, though, for the moment, I don't know from whence it will come. Projects already in the works. I haven't updated the minis counts, but I do have a fair pile of both Official, and Proxy Tekumel figures now. I have plenty of Low class figures. A few and sundry potential temple guards and merchant guards, that need painting. And a box of goodies I bought from Tita's, that I haven't even opened, cause I need to figure a good way to organize them. I figure since I didn't open em, I can count the expense as a 2010 expense. They were about 200 dollars in figs, and that was taking advantage of a 50% off offer he made just prior to the Holidays.

On the terrain front, I have a fair number of conifers, from last year post christmas sales, and I have a nice wreath I will disassemble for creating shubbery, and maybe some exotics. I need to hit the thrift stores and such for more wreaths and such. Project for this week, when this stuff is still common, and cheap.

I also have a lot of Poly styrene packing, that I can convert up for temple fronts, and such, I think. I don't know what else to do with it, though some may be tasked for non tekumel terrain. Chirine showed me a trick for making quick and painless temple exteriors, so that will probably come up. And I am hoping to make some dungeon pieces. More on that as the plan develops.

And I plan to go to Ann Arbor this year. I think I will even take vacation for that up front.

Well, this was pretty rambling. Probably up too late last night. I will edit it later. Maybe add a bit. Later fans.
Posted by kokigami at 9:12 PM No comments: Links to this post