Well, last month I failed to make a post. For unexplained reasons, the month blew by. We did play, and I will try to bring this up to date. This first post is several weeks overdue and will be sparse on details, I am afraid.

With the midnight ritual droning on, the party began to explore again. They returned to the halls near the library, and found the ranking priests offices, and quarters. They entered and found another copy of the book, an older copy, which they pilfered. And eventually found another exit but it led down, not to the sewers, but to the Tsu'urum. It was locked, and chained. They left Suni to pick the lock, and went back into hiding, and awaited a report of success. She was successful, though it took a while, but she made did not alarm anyone in the process. She made a furtive effort to explore below on her own, but she had no lighting. She returned for the group, and they escaped to the level of the red hat Ditlána of Xkcd. They emptied into a chamber of Thúmis, with, apparently, only one exit. And, to their surprise, it appeared to be guarded, or at least light could be seen, and footsteps heard. (Here I will say that I was unprepared for this eventuality. I had not expected them to go this way, so I went to Dave's Mapper, and started mapping randomly. 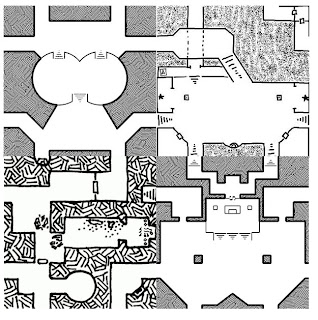 They knew they needed to find a way up to the sewers, or perhaps to underworld temples to one of their Gods, preferably Hriháyal or Grokking.. And these were both Northish. Trapped in this room, they searched for secrets, and found a hidden exit North. Ksárul must be favoring them.

They then wandered aimlessly, finding old clan houses, and clan house temples. They managed, by pure luck, to avoid a number of hastily justified encounters, simply by choosing the right exit from areas. They nearly stumbled on some items that had surprised me. But, it was surprisingly uneventful until they found a Clan House for a Clan that follow Sárku. There they disturbed the Mrúr Guards. Here they used a wedge like object to jam a door, and fled. This led them to a ladder, which led them to the surface, in the slave pits of a slaver clan, just north of the north wall. Here they found an Ahoggyá slave keeper, who found their predicament amusing. And took a liking to them. So, he made a deal with them to ransom the group in exchange for slaves, and Sanjesh went to purchase some while the rest remained hostage. The Ahoggyá held up his bargain, and when the slaves were delivered, the party was released.

They took the books to Mriga's clan, paper-makers, and scribes, and set the resources of the clan to work copying and comparing them. That was the end of the game session, and the next week was largely book keeping, as the players waited for the copies, and did research.

They were notified by the temple of Hriháyal that the purchase agreement for the land was being contested by the Ito Clan, who had unearthed a 1000 year old flaw in the title paperwork. Ito's had dispatched a messenger to Avanthár as well. They learned that the current owners of the land, the Plume of White, had purchased it from the Tangled Root Eaters at that time, and they had received it as a land grant at their formation, approximately 1400 years ago. They also learned that, the bureaucrat who had made the error was believed to still be roaming about, having earned the prestigious status of Jájgi. It was suggested that they try to find him, and clear up the error.

They heard rumors of Mu'ugalavyá scouts and small skirmishes being fought in Do Cháka, up near Tumíssa. The Bulk of the Legion of Tangled Root eaters, a Páchi Lei legion, was currently up in Tumíssa, operating the defenses against said Mu'ugalavian incursions. As players are wont to do, they took an end run around my Jájgi plot line, and decided to approach the Legion, to sort simply replicated the original purchase agreement, or make a deal to purchase the land directly, if the courts should determine that they still owned it.

Posted by kokigami at 12:06 PM No comments: Links to this post