Well, the ref screen has not moved much. I have printed a few charts, still collecting others. Trying to decide what data I want at my fingertips and what I can live with looking up. Titles, Clans, an abbreviated History. But how abbreviated. It would be nice if my clan chart showed temple affiliations, and it would be nice to have a temple chart with clan affiliations. Andw the two are not redundant, really. We played last night (campaign update in the works) and the group was in the underworld, and managed to get themselves into the lower levels, which I was mapping as we wet using Dave's Mapper.. And I found myself saying, " The space you've entered it an excavated Clan house of one of the clans that follows Thumis.. " It would have been nice to look at a chart and pick a clan. I know the data is in the Mitlanyal, but, looking it up takes time, and I havent' got the memory anymore to get it all in my head at once.

Daves Mapper is nice, and I quickly had the party going in circles. I was using it via an Ipod touch, which was interesting, but left me no good way to record the spaces they went into for possible future reference. I saved most of the individual tiles they travelled through, and they weren't mapping, relying on dust footprints to back track, should they find the need. Everytime I rolled an encounter, they skipped a few doors and made a bee line for their destination.. I probably could have been better prepared..

But we ate well, as Mriga, and Suni cooked some very tekumeliani fare.. We are going to add occasional dinners to the regular routine... So there goes any serious plan to lose weight, I suspect.. 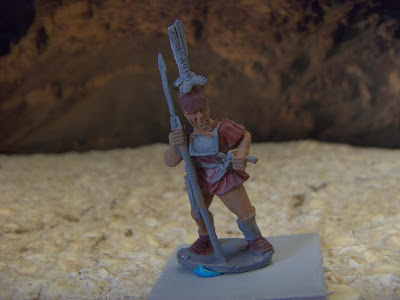 I have found a bit of time to paint, or, at least do what passes for painting in my world. I am painting some Romans to proxy as Tomb Guard.

The colors are washed out in real life as well. Not sure how to fix that, except possibly spend money on quality paints. Not sure what color to paint the plumes. Currently, the chest armor is brown for Sarku, and the kilt and shoulders red for Vimuhla, being soldiers and all. The shin guard will be copper,as will the breast plate or perhaps just the plate trim. The Plums I haven't decided yet, though Blue for the Empire seems likely. Still need to come up with some awesome shields. Opinions welcome.. Be kind... but honest..

Well, I didn't have access to a printer, so I didn't make any progress on the screen, but I did have my paints, and I worked on the tomb guard a bit.. improved. still hack quality, but, improved. Had purchased a brighter red, so the kilt pops a bit more. Added copper and touched up some things. Plumes in Red and Blue.. 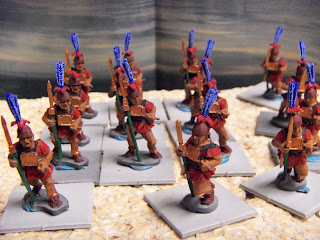 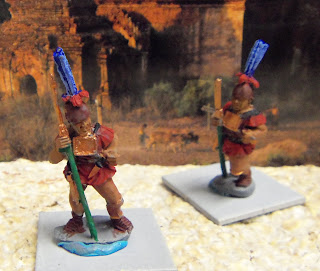 Posted by kokigami at 10:14 AM 4 comments: Links to this post

Stuck in a box

Backing up a moment, Our heroes convinced the Swamp Folk to assist them to get into the sewers inside the walls again. The Swamp Folk agreed to take them down into the restricted level of the Tsu'urum to lead them under the walls. They knew of an old Clan house there of the Great Stone Clan, which contained a labyrinth, which led, among other places, to a passage. The party would have to travel in darkness, so as not to attract what might reside in the labyrinth. But the Swamp folk, who are sensitive to “wrongness”, knew a way through the labyrinth, and would guide them.

So, hand in hand, they all made their way, quickly and silently as possible, through the maze, with their non human guides leading and taking the rear. Suni toyed with the idea of detecting foes, but, decided not to risk attracting attention with a spell, even a psychic one. The came out, and were given directions to a room that would lead back up into the sewer levels, and were left to their task. They were advised not to try to take this way back out.

Once back in the sewers, they moved downstream until they found a junction, just above the SW gates, leading to the river. They split into groups, to try to avoid looking conspicuous, but, somehow, they managed to attract the guards notice. Still, the guards let them pass without question – there was nothing technically illegal about being in the sewers, even if their arrival from that direction seemed odd. Technically, the guards were there to keep people out, not interfere with people who were already inside. So the party moved back upstream to the north, and eventually found the sewers that should put them below the Temple of Avánthe from the Red Hat Ditlána of the mid 1700s. And with much searching, they found the trigger to open a wall, and go in.

They found themselves in a supply room, off two converging halls, with the sound of chanting coming from each hallway. The halls were empty, and they knew it was getting on in the day. They assumed that rituals were in session and they decided to take advantage of this to look around. Down the right hallway they found three doors, two apparently private quarters, one a communal quarters, and a dead end, leading to UN-excavated space. Down the left they found Lavatories, and an office. Both directions seemed to flank the main ritual hall with doors that probably led inside.

Further left they found the smell of cooking, and, accidentally ran into slaves carrying Hot water to ritual baths, but the slaves were too busy to take notice of which priests were in the hall way. They found a side passage that led to administrative rooms and, in that section found the library. It took a little time to figure out the organization, but they did locate the book “A history of the flood of 643 and the appearance and disappearance of the Irriguous Dead”. They purloined it, and a few random others, and beat back to the storage room. Unfortunately, they still had not found the mechanism to open the door from the inside. And the ritual ended, so they hid back in the stair well. Slaves brought ritual paraphernalia into storage, and left and the halls outside became much more active. Another thorough search of the room, and still no mechanism. It was late, and eventually, the halls quieted down again. The midnight ritual to bring back the light began, with a skeleton crew of junior priests and priestesses, and the ranking members retired. A quick journey into the hallways found “Silence, I slumber”, Méshqu plaques on various doors. And time ran out for the session...

Posted by kokigami at 8:53 PM No comments: Links to this post

More from the desk,

Though we played last week, this post is not a campaign post. My apologies. I had the latest update mostly written, but I can't find it, so I will start again tomorrow. I had planned this post for after that, but, due to the delay in that, I decided to write and post this.. which is my January Project plan.

I debated what to do first, and my first inclination was to do something with my growing pile of lead. The mass is becoming a gravitational force in my geek room. But, my campaign is not focused, as yet, on minis. Probably won't be. Occasionally I hope to break out the 28s for a skirmish, and eventually maybe the 6mm for a campaign. But, Essentially, we are meeting round the table for improvisational readers theater. So, my focus for January is to get my campaign info in better order, and first up is a Ref screen with charts. The idea is not new. Most game mechanics have some kind of Ref screen available. I bought the one SJG produces for GURPS in PDF, but it needs work to customize it for my campaign. And it, obviously, only addresses game mechanics.

Honestly, I tend to run on a slightly crunchier version of the roll a die system that the Professor uses. The official game math only comes out occasionally. Roll 3d6, low is good, works 90% of the time. But the combat portion of the screen is complete now.

What I really need, however, is a Tekumel cheats screen. I find that I am still often forced to stop play while I research part of the Timeline, or the name of a Legion. The world is rich, and detailed, and my mind is not so supple anymore. So I am working on a screen that shows Temples, and Clans, and History timelines, and such.. I hope to post pictures when done.

I did not go down to the New Years Games in the cities, and I regret that. I was scheduled to work NY day, and the weather was not great, with rain leading to ice. Sounds like a good time was had by those braver than I. No guts, no Glory, as they say.

I found a blog with a very different Tekumel slant. The author is working on some very ancient Tekumel History. Pre history.. pre bethorm (pocket plane). Humanspace.. Well, look for yourselves. It is a very intriguing concept. Geo, you were thinking of running something?
Posted by kokigami at 10:12 PM No comments: Links to this post

Well, last year I managed 24 posts. On average 2 per month, though some months had more and some less. It is up from the year before, and more focused, as is appropriate for my Year of Tekumel. So with the first of the year it is the season for making plans and resolutions for the new year.

Tekumel activities will continue. The campaign has had a number of canceled games of late, but that is not due to lack of interest. Work and school schedules have conspired against us at times. That probably can't be helped, after all, none of us has the luxury of a high school life anymore. But Mriga and Suni have found employment locally, which was a concern.

I hope to bump the blog posts up, shooting for 36 for this year. That seems doable, if I simply keep up on the campaign, and trivial if I also record other game activities. For example, I don't think I have mentioned here my recent ACW game with Chip and friends. Forgot to bring a camera, so there wasn't much to report. I have also not blogged about recent mins purchases, and I could certainly have said more about UCON. I will also try to add some more Bling. I have plenty of figs to paint, and terrain to build, so that should help.. And there may be a top secret project about which I can leak some info.....

This year will still focus on Tekumel, but will include other gaming. However, I, like many gamers, am easily distracted. So this rule will apply. Each month I will set a goal for myself, and I can't do non-Tekumel projects until the month's tekumel project is done. This will probably involve completing a few projects that I have half done right now.. and breaking down some unpainted figures into project groups.

I think better with Pen and Paper than keyboard, so details will probably come after some time away from the screen. I need to think about the Butrus underworld as well. More later..
Posted by kokigami at 2:45 PM 1 comment: Links to this post