On the roads again

Their biggest obstacle in leaving was that the Sakbe road guards didn't really want to let them leave, and there was a steady flow of refugees cluttering the lowest level coming into Tumissa. There were a few members of Merchant clans heading towards Butrus, but anyone headed out of Tumissa would be swimming against the tide.

It was observed that the middle Tier was nearly empty, and the party started conspiring to get an upgrade. In order to do that, they were going to need to become part of a party with some Status. Mriga went to his temple, and he made some contacts. They found a High status Priest of Thumis who was looking for body guards, and they signed on.

Even so, security was tight, and they only made it one third of the way on the first day, when the Sakbe road guards announced that Mu'ugs had been reported on the road ahead, and no one was allowed through. (Unless, of course, they insisted, and had the status to back it up - which our priest of Thumis did.) They made good time for the morning, then they hit upon a guard house, Tower, with the doors locked from the inside. There were signs of a fight outside, debris, perhaps a merchants retinue? And blood. The Gate house on the lower level was passable, but the stairway up was locked. They climbed up the wall, and cautiously peered at the top Tier.

Technically, none of them had any right to go up to this level. Probably a capital offense. But there was blood on the Beautifully inlaid path, and it lead to the door to the tower. The group reasoned that someone of import had been attacked, and further reasoned that they would not be judged any less harshly by the system if they failed to attempt to render aid.  So they climbed onto the sacred third tier. The blood led to the tower. On the far side, on the wall facing the Chakas and Mu'ugalavia, a lone long slender ladder scaled the wall. Probably not the work of the Mu'ug army. Deserters? A strike team? Spies?


If you are not knowlegeable of the ways of Tekumel, the Sakbe roads are tiered to reflect the class conscious social structure. The bottom tier is for commoners, the next for nobles, the top tier is for imperials and the highest nobles. 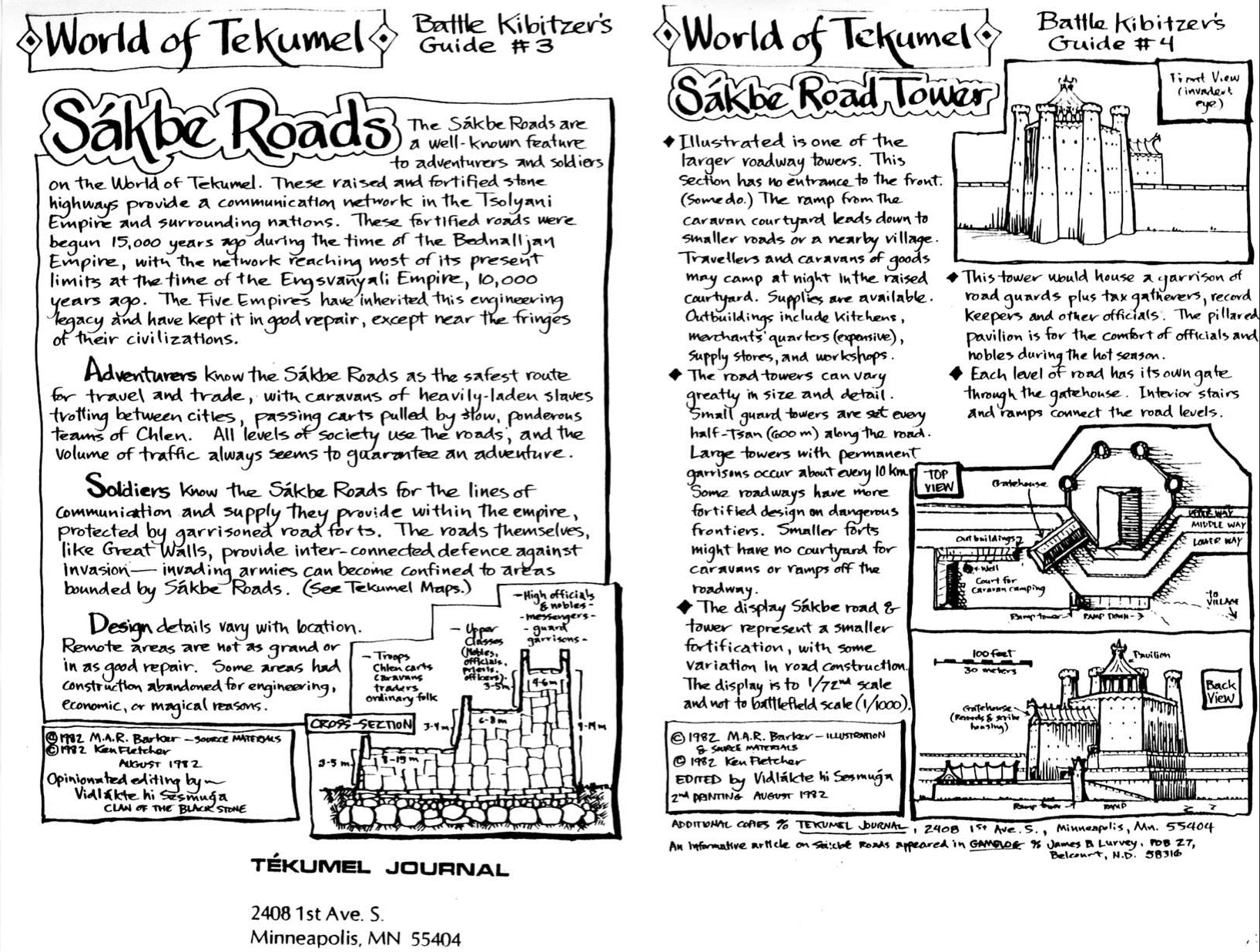 The image should give you more information if you follow it to the source.

Mriga discussed attempting a spell to force the door, but wiser heads prevailed. It was generally believed that the Sakbe Roads Gaurd houses, being both roads, and imperial bastions of defense, also contained wards - said wards being geared to protect against Military magic. A solitary priests spell would probably only result in his own death.

They decided to check the roof, where they did find a open hatch, and they went inside. What they found was a body. An imperial messengers body. He had, apparently, been running the top tier when he came across someone and was injured. Perhaps he was the target, or perhaps a victim of circumstance.

Now a note on Tsolyani culture. In most RPGs, a dead messenger would be an invitation to loot the body. On Tekumel, this would be a crime. And crime has consequences. Our heroes bound up the body as they found it, built a litter, and carried, otherwise unmolested, back to Butrus. There they underwent a long, and serious line of questioning. And a few moderately intrusive spells. But, as their story checked out, and they did the best they could at securing the messenger and his cargo, and did not shirk their responsibility to the Empire, they were released, provisionally, to their respective clans recognizances.

Butrus was suffering a shortage of legionary defenses. The Itos had stepped up, and organized the various temple guards to pull watches, and patrols. The Itos, being the most powerful local clan, with a history of rebellions against the Empire, and establishing their own independent principalities, could always be counted upon to try to run things in times of trouble. The big question would be if they would be as willing to stand down when things were calm again.

Word came that the Itos had also begun snooping about the cave entrance area. It was decided to stage a cave in, and close down the cave entrance, try to hide it, and cease operations there until they knew which way the wind was blowing.

It seems prudent, and should not be taken as an insult, that I moderate posts.